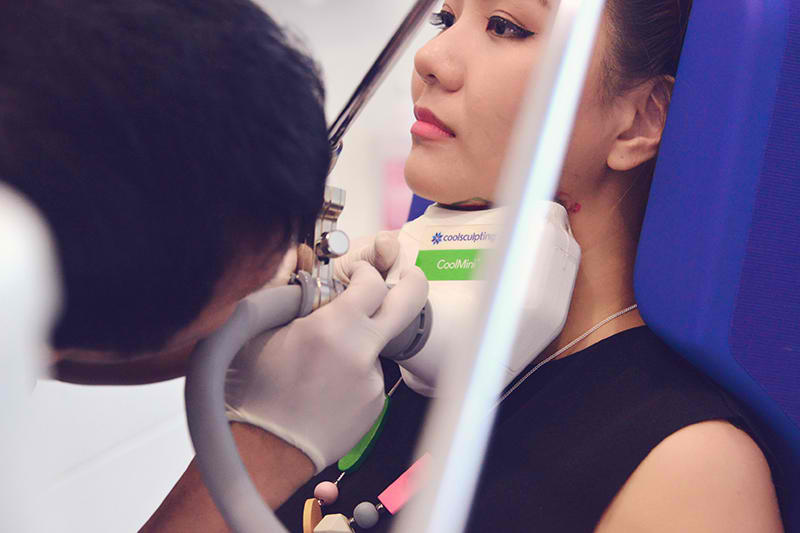 During recent years, more and more people have become body conscious. Some due to health concerns, while others for aesthetic reasons. Because of this, different diet fads and exercises have been developed all offering to help get rid of one unflattering and unwanted body part: excess fats!

There are people whose fats cling stubbornly to the body, despite trying several diets and busting every move available in their yearly gym subscription.

Is there any other way that the body can lose these bulges?

For sure you are also asking the same question, hence you are reading this article. Well, do not stop now! We are happy to tell you that, indeed, there are other ways to get rid of those love handles, banana rolls, and even that extra layer of the chin! Read ‘til the very end to get to know about the experiences of 4 Singapore bloggers who turned to CoolSculpting in order to achieve a slimmer figure!

My "Coolsculpting" Review - Does It Really Work on Fat Thighs? By Supermommy

Neetu, who goes by the blog name “SuperMommy,” shares one of the body struggles that she has after being a mom to two boys. SuperMommy discloses that her tiny frame gained a combined weight of 40.5 kilograms during her two subsequent pregnancies. She reveals that she was able to successfully shed off this weight in the course of 7 years through eating healthy and regular exercise. Yet despite this, there are still some fats on her upper legs and thighs that refuse to go away.

At the start of her consultation, SuperMommy mentions that this was her second time to do CoolSculpting. Her first experience (with a different clinic) was not done properly; hence her lower limbs still had fat issues that she addressed in her review. During her treatment, SuperMommy’s doctor determined the parts where her initial CoolSculpting failed to treat. Her doctor created a treatment plan uniquely designed for her concerns. For this treatment, 4 different CoolSculpting devices were used on her buttocks and thighs.

To be precise on which areas are for treatment, SuperMommy narrates that her doctor placed markings on her right and left thighs. The crucial part with CoolSculpting is ensuring that the places to be treated are both balanced so that the results are symmetrical. Imagine how funny and weird it would look like when one leg of yours looks toned and the other still bursting with fat!

The doctor then took SuperMommy’s photos. She discloses that this is a requirement is essential to properly see the results of CoolSculpting after the procedure is done.

Now it is time for the CoolSculpting action to begin!

A sheet of a special cool gel was covered over the markings on SuperMommy’s thighs. She says that this gel sheet served as protection for her skin during the procedure. After this, the CoolSculpting machine was placed correctly over the target area.

The CoolSculpting machine set off a beeping sound indicating that the procedure was done. After which, the device was removed and the treated area was massaged deeply to quicken the breakdown of the fatty tissues which were now frozen. SuperMommy comments that it was only this time in the treatment that she felt discomfort.

Fortunately, her clinic had several CoolSculpting machines and she was able to get treatments for both of her legs simultaneously, which cut down the time of treatment. So instead of spending 6 hours in the clinic, SuperMommy cut that time in half and was already done by the 3-hour mark, not including the pre-treatment preparations of consulting with the doctor and marking of the target areas. Depending on which part of the body you are getting treatment for, you can either sit or lay on your stomach during the procedure.

As for results, SuperMommy tells that it would take 3 months to see them.

Blogger Joanna confesses at the beginning of her blog that she has packed on a few kilos, the excess fats of which resided in the pockets of her arms. This, she says, upsets her because her arms look chubby and unflattering in her photos. So, after thorough research and reading positive reviews online, Joanna consulted with an aesthetic clinic about CoolSculpting.

During her consultation, Joanna’s doctor warned her that the procedure might hurt a little. She discloses that the areas for treatment will turn extremely numb. Despite this warning, Joanna gave her consent to her doctor. Off to freeze and get rid of her fats!

As Joanna’s photos show, her doctor marked the part on her arm where the excess fats are. The application of the cool gel followed suit. Joanna mentions that the time needed to finish one arm was an hour. Her session lasted for 2 hours since she had both of her arms treated.

During her treatment, Joanna says that she watched YouTube videos on her phone to pass the time. What she found uncomfortable during the treatment was the fact that she had to stay still for 2 hours. Her arms felt sore from the pulling and numbness, but this feeling subsided after 10 minutes. She also mentions that this procedure will need no downtime and that patients can quickly return to their daily activities after the treatment.

As for results, Joanna reveals that she waited for a month to see the difference that CoolSculpting made on her arms. And it did not disappoint! Joanna’s arms looked slimmer in her photos! In fact, she was very pleased by the outcome that she recommended CoolSculpting to one of her colleagues who wanted to rid her tummy of love handles!

Head on to Joanna’s blog for more of her review about CoolSculpting.

My Favourite Shortcut to Fat Loss by Ju Ann

If you think that CoolSculpting is only effective on larger areas of the body have huge amounts of excess fats stored, this blog busts that thought. Whether a little fat or a lot, CoolSculpting can very much address those!

Ju Ann does not deny in her blog review that she is a huge fan of CoolSculpting. She has used this treatment to get rid of unwanted fats in her body. In this review, she uses CoolSculpting to shed off the second fatty layer of her chin.

At the start of her procedure, the doctor marks the extra fats of Ju Ann’s chin. After which, Ju Ann says her procedure commenced. During her treatment, Ju Ann sat on a plush chair and busied herself by reading magazines or using her phone while the CoolSculpting applicator was secured underneath her chin.

Ju Ann discloses that she felt the device sucking on her fats. Despite the sensation, she felt no pain. When the treatment finished, her chin felt a bit sore and sensitive to the touch. This lasted for 1 week. Ju Ann warns of bruising that may be experienced by some people. There is no downtime needed and patients can easily return to their daily routines. Ju Ann includes the cost of her double chin fat reduction, which is at $980 per session.

My Coolsculpting Journey by Christy

Cathy has been bothered by her thighs for the longest time. She mentions that wearing skirts and shorts made her feel unglamorous because of the fats that cling to her thighs. So, to get rid of the fats, Cathy decided to schedule a CoolSculpting session.

In her blog review, she discloses things to expect when walking into a CoolSculpting procedure and even throws in some tips, like what you can bring to the clinic to kill time while the procedure is in progress.

Christy suggests bringing a book, mobile phone, and a cardigan on the day of the treatment. These will come in handy as she was told to expect the treatment to last for 4 and a half hours. The time projected already includes doctor’s consultation, marking of the skin, and other preparations are done before the application of the CoolSculpting machine.

Christy shares that it is of great advantage when the medical provider of your CoolSculpting treatment has more than one machine available for use. In her case, 2 CoolSculpting machines were used for her thighs, thereby reducing the time spent in the clinic by half!

As soon as Christy’s thighs have been marked out, she discloses that a gel pad covered the areas where the excess fats are to be treated. The gel pad served as a layer of protection for skin once the CoolSculpting applicator is in place. Following this, the CoolSculpting device is programmed, and Christy reveals that she felt the machine tug on her flesh. The area on which the device was working on also felt extremely cold and numb. However, these sensations were only temporary. To make her comfortable all throughout the procedure, cushions were propped against her legs for support and a blanket was given to keep her warm.

When the CoolSculpting device ended its treatment, a therapist proceeded to massage the part of Christy’s thighs that were frozen. She mentions that it was a bit uncomfortable, but the discomfort was bearable. She further explains that this part of the procedure is important as it aids in breaking down the frozen fats that cause a reduction.

As the procedure completed, Christy recalls feeling a prickling sensation on her thighs. This eventually subsided within 5 minutes. She did not have any problems with her movements and she was able to change into her clothes without a problem right after. She notes that some parts of her thighs were a bit red, however, the redness disappeared the next day. Numbness on the treated areas stayed on for the first 2 weeks following the treatment.

A month after her CoolSculpting session, Christy bares that her thighs look slimmer and she was already able to fit into her jeans and pants comfortably! Her before-and-after photos remarkably show the effectiveness of CoolSculpting!

CoolSculpting is a procedure that is non-invasive and safe, perfect for people who wish to have a slimmer body figure without having to undergo risky surgeries. We hope this article has encouraged your desire to look thinner!